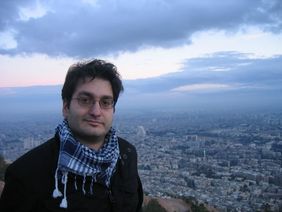 Hassan Abdulrazzak is of Iraqi origin, born in Prague and living in London. He holds a PhD in molecular biology and has worked at Harvard and Imperial College.

And Here I Am
”Irreverently funny....charming and compelling” The Stage ****

Love Bombs and Apples
”Witty and insightful" The Scotsman ****

Baghdad Wedding
“Hassan Abdulrazzak’s astonishing play tells how human lives are shaped by political crisis” Michael Billington (The Guardian). Billington chose it as his favourite play of the year.

Represented by
Emily Hayward-Whitlock at The Artists Partnership Ltd.

Science
Hassan received his PhD (on Muscular Dystrophy) in 1999 from University College London. His first post-doc was with Prof. Steve Marston at the National Heart and Lung Institute, Imperial College studying mutations in troponin leading to Familial Dilated Cardiomyopathy. After that he worked briefly at Harvard University in the lab of Prof. Amin Arnaout, studying unusual DNA structures in the promoter of an integrin gene. He returned to Imperial College to work with Dr. Clare Huxley on Mammalian Artificial Chromosomes. From 2006 until 2013, he worked on stem cell research at the Royal Veterinary College and Imperial College. He often comments on breaking science stories for the Arabic department of the BBC  (TV & Radio).
Scientific Publications
Background image by Xavier Pick
Powered by